This Halloween Season…be ready to travel to infinity…and beyond in your own Buzz Lightyear costume! If you seen the classic Disney and Pixar computer animated movie series, Toy Story, you know that Buzz is the iconic toy space ranger who believes his own make believe past…a space age hero from the Intergalactic Alliance on the mission to battle the evil forces of Zurg. However, all of his Toy Story friends know the true story…they see Buzz comically as confused but endearing friend who is simply another animated toy just like them! This is probably why the audience love the character and like you, we are ready to launch an event of epic proportions dressing up in Buzz Lightyear costume! 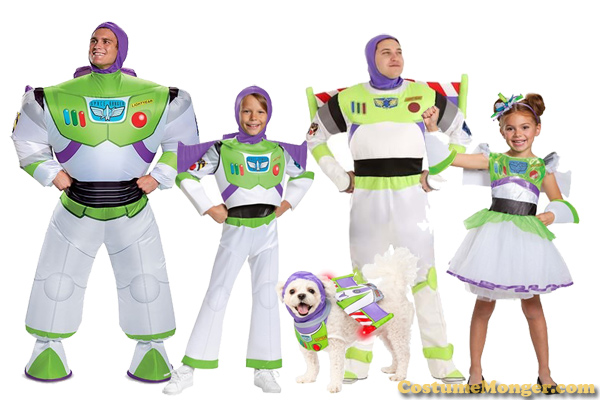 According to the movie’s creator John Lasseter, the name of this space ranger was an homage to the real-life Apollo astronaut, Buzz Aldrin! In the movie, Buzz Lightyear believes that his spacesuit contains a multitude of functions including flight, communication with Star Command, ability to translate languages, and his powerful laser beam! Most of all, you can’t forget the liquid adamantium-nitrogen layer which allows wearer to survive any physical conflict and to repel telepathic intruders! Since we are in the real world, those super gadgets and powers won’t be included in your futuristic Buzz Lightyear costume. The replica Buzz Lightyear costumes do attempt to capture the spirit of the original so we found several Buzz Lightyear costumes that you can choose for Halloween and you’ll still feel like an awesome and able space ranger in one of many Buzz Lightyear costumes.

The Buzz Lightyear Halloween costumes usually have a white futuristic astronaut jumpsuit with lime green accents and a mock utility belt is attached around the middle. The chest of Buzz Lightyear spacesuit are designed to look like a control panel of computer buttons and badges. Boot covers attached to the jumpsuit of costume are designed to cover up your own shoes making it look like you’re wearing Buzz’s special boots. A purple hood acts like a helmet covers the head, while still revealing your handsome face. The back of the Buzz Lightyear outift displays the purple and white striped toy wings that help Buzz create the illusion that he is flying…remember you can’t really fly in this spacesuit! In the movie Toy Story, Buzz finally discovers that he’s not a space hero when he falls after attempting to jump off the stairs! His failed attempt to fly like a space ranger ends with him breaking his wing.

The costume accessories that are a must-have for all Buzz Lightyear costumes include an inflatable jet pack a pair of gauntlet-style white gloves available separately. If you are feeling like you want to be a part of the Toy Story team, then get a black magic marker and inscribe “ANDY” on the sole of your choice of Buzz Lightyear costumes just like his sidekick Woody, the toy cowboy! If you want to add another funny touch to your outfit, write “Made in Taiwan” near the control panel. If you have friends and family who wants to join in on the Toy Story costume party, you can get them to dress up as the other characters in the movie such as cowboy sidekick Woody, Ms Little Bo Beep, Slinky Dog, Mr. Potato Head, Pig or Zurg, for Halloween! So suit up in a Buzz Lightyear costume and have a blast-off great time at your next costume party!