Masks play a big role in Mardi Gras festivities and have an interesting history. Since medieval times in Europe, carnival masks have been a fascinating part of Venetian culture and even after all these years they still captivate and charm people of all walks of life. The Venetian Carnival season was a favorite time for people of all kinds to dress up, go out and get a little wild. Once lasting from December 25 until Fat Tuesday, there is now a shorter version of the festival that has been staged since 1979. 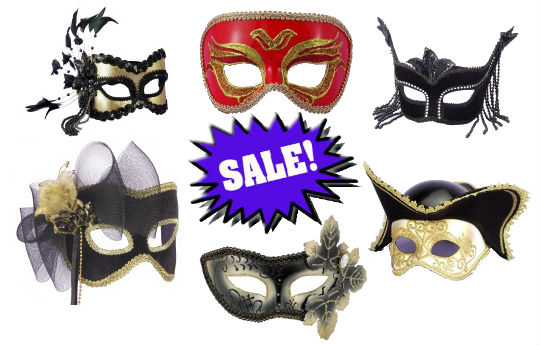 Carnival season was a rare time of year when it was acceptable for the classes to interact with one another during a time that encouraged drinking, song, dance, gambling, promiscuity and all around decadent behavior. The masks not only allowed the wearers to act freely without fear of being identified but it made it easier for the people of different classes to interact with one another.

The earliest versions were created by master craftsmen that sculpted a mold from clay and then used a ancient papier-mache technique to fashion the mask. Although the masks produced today are lavishly appointed with sequins, glitter and gemstones, their ancestors were quite plain by comparison and more symbolic than decorative. Adding feathers, shells and bones originated on the African continent.

Masquerade masks are divided into groups according to individual characteristics and their size. Some of the more popular kinds include the bauta, the Medico Della Peste, the columbine and the volto. Depending on the mask, either all, half or only part of the face is concealed.

The history behind the Medico Della Peste is as bizarre and macabre as its appearance. Also known as The Plague Doctor, the distinguishing characteristic is a freakishly long proboscis. The strange face mask was created by a doctor who treated plague victims in the 16th century. The idea was that the long beak would protect him from becoming infected while dealing with his patients.

The most popular full mask is the bauta. This haunting piece has a blank expression, holes for the eyes and no opening for the mouth. Tilted upward, the jaw is square and positioned as it is to allow the wearer to drink and talk normally while wearing it.

The Columbine character in Commedia dell’arte was typically played by a beautiful young lady and lends its name to the traditional half mask that covers the eyes only. It was designed so it would not shield the lovely face of the lady wearing it and it can be held in place with a ribbon or manipulated by a stick attached to its outer edge. The Columbines created today are extremely elaborate and decorated with gold leaf, precious gems, crystals, glitter and fancy feathers.

Another full mask is the volto. This was usually worn by men along with a cloak and tricorn hat. It also featured the upward tilting chin to allow greater comfort and freedom of movement for the wearer.

Still popular today, these masks are favorite accessories for costume parties and masquerade balls. As artwork, collectors can group them into breathtaking wall displays that come alive with color.