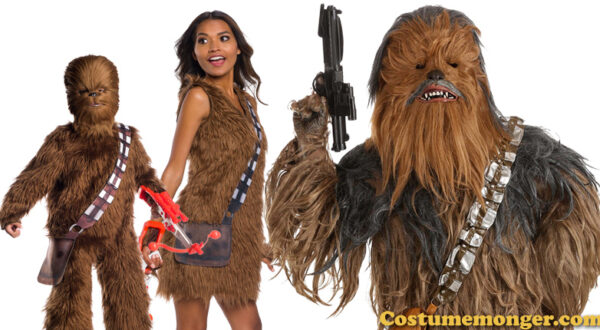 If you loved watching Chewbacca in the Star Wars movies, you should suit up as him and wear the ultimate Wookie cosplay! Straight from Kashyyyk, a Wookiee planet from a far, far away place in Star Wars movie universe, is the official Chewbacca cosplay costume! Dress up as the legendary Wookie from the big screen for Halloween. The movie quality of this costume will impress all of your friends on Halloween night! As you know, your favorite furry sidekick returned in the recent new Star Wars movie trilogy. You might even see Chewbacca back again in a new Star Wars TV series on Disney+!

The Collector’s Edition costume is amazing as the entire outfit is covered in authentic fur so you will look just like a Wookie from the movies! Your friends can also join in by dressing up as other legendary Star Wars characters such as Chewbacca’s loyal best friend Han Solo from Episodes IV, V, VI! You and your friend can bring intergalactic peace on Halloween night!