A gorilla costume is one of the most fun costumes to dress up as this season, but it’s also a tricky outfit to piece together on your own for Halloween. Where a ghost or devil costume is relatively simple and straight forward to create from things around your home or apartment, transforming yourself into a gorilla requires a whole different set of materials and challenges. First of all, you need enough black fur to cover your entire body is not something you usually have in your closet. Fortunately for those who neither have the time or patience to create their own gorilla costume, there are some pre-made gorilla costumes from online stores to choose from, ranging from budget costumes all the way to deluxe! These gorilla Halloween costumes are available in several sizes for adults, plus size full figure adults, and kid sizes! The basic components of these Halloween costumes are the gorilla’s furry jumpsuit, gloves, foot covers, and most important of all the gorilla mask! You can add simple accessories like a banana or beach ball if you don’t want to look too scary! 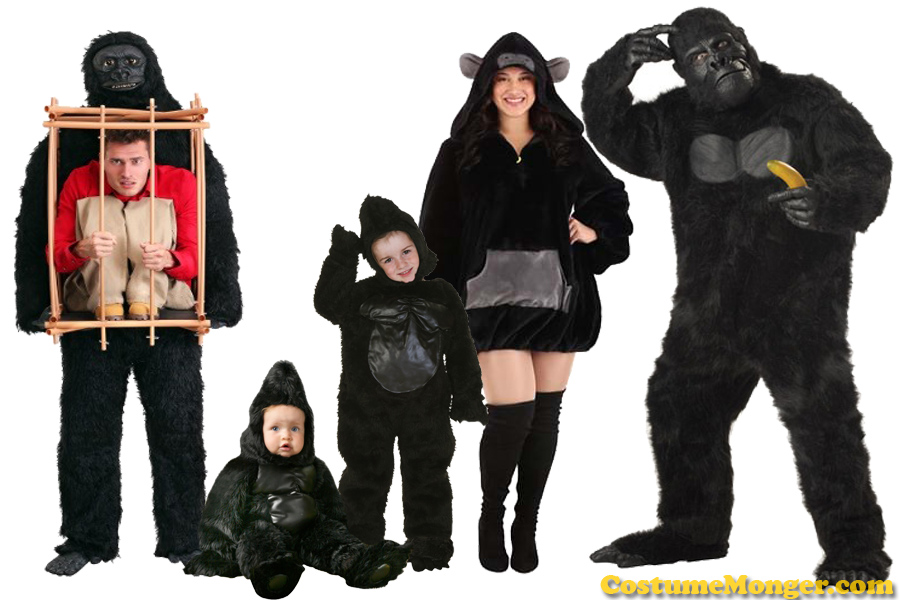 Halloween party goers can also enjoy a bit of monkey business when they spot someone in a gorilla costume stomping into their costume party. This is also a great idea for children when the kids’ party is a jungle or animal theme party.

Every kid can dress up as an animal from the jungle be it lions, tigers, or elephants and let them loose so they can a real good time! So, hosting a costume party can be a lot of enjoyment no matter what age group it is for. Everyone loves the chance to dress up in Halloween party and act silly in ways that they wouldn’t normally get to do during the normal time of the year. No matter what Halloween costume you get to wear a party, it is guaranteed to be exciting. The theme parties are becoming very popular among with the younger children, turning your backyard into a jungle and letting a bunch of kids suit up in gorilla and other jungle costumes for all of the kids is sure to result in some hilarious antics.

A Gorilla costume can be a source of humor or horror depending on the type and style of costume the person who is wearing it chooses. Even though the most common time for a gorilla costume to be worn is Halloween, in recent times, these outfits have been showing up at just about any masquerade event no matter what time of year. In film, the gorilla costumes started showing up in the late 1920s when Charles Gemora starred in the short film Circus Lady and then followed it up with appearances in the Our Gang TV show also known as The Little Rascals. You can’t forget, one of the most memorable uses of gorilla costume and other monkey suits in movie history was the the film series Planet of the Apes. The designers brought costume realism to a new level. These frighteningly realistic suits were used to showcase a world that had been taken over by intelligent talking apes after humans had all but destroyed both the planet Earth and themselves.

At one point in history many members of the rich and elite kept a gorilla suit in their wardrobes and wore them any time they went to a fancy costume or masquerade party. Wealthy men like Jay Gatsby wore theirs whenever there was an opportunity to do so, much like the dinner jacket was for formal events the gorilla suit was standard any time there was a call for well to do tomfoolery.

Today gorilla suits can be bought online, or they can be rented just for an event, a party or just for fun. Imagine the fun you could have walking around town sporting a gorilla suit. Gorilla suits have even been used in a variety of stunts such as bungee jumping and skydiving while dressed in one. Guinness has an entry for the largest gathering of people wearing gorilla costumes which was created in back in September of 2005 when 637 people wore their gorilla costumes to participate in the massive event!

You want to also pay close attention to the quality and look. Just like any kind of product, costumes can be good and bad. You get what you paid for. Of course, if your budget isn’t there and you don’t want to try and justify paying a lot, then go with a cheaper model. Something is better than nothing. In that case, maybe your Gorilla acting will make up for it. Even if it isn’t a perfect costume, you’ll still have fun with this one. Most adult gorilla costumes come in a one size fits all and can cost a few pounds or if you want a really good one you could expect to pay significantly more depending on where you go to buy them. Imagine the fun your family could have thrown a birthday party for one of your kids if everybody had to come dressed as a gorilla or perhaps even as a banana.

Overall, there’s a wide selection of gorilla Halloween costume choices depending on your style and taste, but they are all great. In addition, these costumes are good for staying warm on a chilly Halloween night, which is really important. The party would be one that would be remembered for a very long time. No matter how you plan to use your gorilla suit you are guaranteed to cause a few laughs and have a lot of fun.