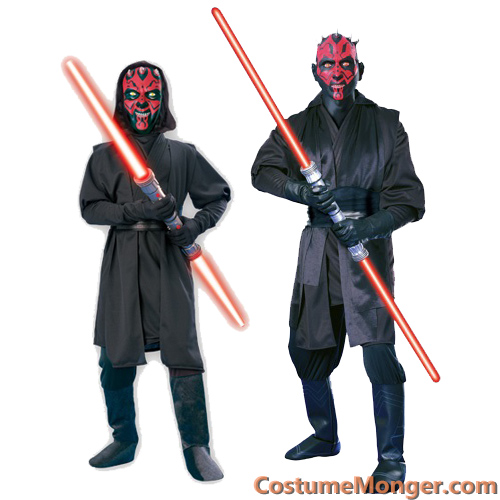 In May 1999, Darth Maul took the world by storm with his brief but memorable appearance in the first Star Wars movie sequel: The Phantom Menace. Fans were once again pleasantly surprised to see Darth Maul resurrected during his cameo in the new Solo: A Star Wars Story movie earlier this year. This Halloween season you can become part of the intergalactic saga of the Star Wars characters by disguising yourself as Sith Apprentice Darth Maul. We have listed a large selection of Darth Maul Halloween costumes below. If you like to learn more about the legendary Sith, continue reading as we will explore the history of this ruthless villain of Star Wars Phantom Menace. In the movie saga, Darth Maul is the first known apprentice of Darth Sidious, the true puppet master behind the Naboo’s Senator who later becomes Supreme Chancellor Palpatine. Together these evil partners of the Dark Side have conspired their way to destroying the Jedi and weaken the Galactic Senate.

Darth Maul has eliminated many adversaries who stand in his way. The fear among people of all galaxies is visibly present once this menacing creature sets foot in their world. Director George Lucas described him as “a figure from your worst nightmare” when he created the villain for his movie. After watching the Phantom Menace, who can ever forget that sinister red face with thick black streaks, red eyes, and several horns? This Halloween you have the chance to transform yourself into Darth Maul and spread menace on Halloween night.

When it comes to the Darth Maul Halloween costume, you might feel intimidated at first when you think about the work required in achieving such frightening look. But with a little help from great costumes and accessories, it would definitely be a breeze to become Darth Maul. Whether for young boys, teenagers or adult men, these costumes can be totally impressive. Everything you need to replicate the entire look of this character is at your fingertips. You do not need to search everywhere to get the best ensemble together.

This clothing usually consists of a black polyester tunic with an attached hood. You should make sure to get a tunic that is loose enough so you could easily move and strike up a battle pose any time. Although some may have fitted sleeves from the elbow to the arm wrist, these normally come with flap-like material at the back to allow heightened activity and mobility. As for your pants, nothing could be better than a pair of black pants that has an elastic waistband for comfort. Being mobile at all times is important to becoming this dark Sith. You can decorate the waist area with a thick black belt. Also, black boots or boot tops with printed decorative gray pattern complement your clothes.

As previously mentioned, his face is one aspect that makes this character very distinct from other characters. Thus, to recreate this faithfully you’ve had to buy the correct facial effects. Should you feel the need to be hands-on with your makeup application, you should find a clear close up image of his face for reference. You can carefully emulate the black streaks perfectly and choose sweat-resistant paint as you need to keep the make up on all night. Remember to make your hair style with horn-like growths. This trick could be done with a touch of strong hair gel. You can part your hair in several segments then twist each part with some gel until you form pointy growths.

If you don’t have time to apply makeup and want a quick Darth Maul face, you can simply buy a Darth Maul mask that can cover your whole head. This is mask is completely detailed with attached ears, the infamous horns, and painted-on nose, eyes, and mouth, with small holes for your eyes to peek through. These masks are available in vinyl or latex material. Other Halloween accessories that can further convince people you are this scary Sith are the double-ended red light saber, long black scarves, and black gloves. Make the night more fun by persuading your family or friends to get together and dress up as a group in a wide variety of Star Wars costumes. Undoubtedly, everyone in the cosplay party would have the most unforgettable out-of-this-world feast ever!

In 1977, Star Wars was first released in movie theaters, followed by two successful sequels, The Empire Strikes Back and Return of the Jedi. To this very day, this remarkable science fiction movie is still a worldwide phenomenon with hundreds of millions of fans. A decade and a half after the original trilogy’s final movie was released, a new prequel trilogy—Episode 1: The Phantom Menace was filmed; followed by succeeding two sequels, Attack of the Clones and the final prequel, Revenge of the Sith, released on May 19, 2005. The great success of this movie made it the third highest-grossing film series at its time. Star Wars series did not just dominate the movie industry with its popularity but also spun off toys, comic books, television series, video games, and Halloween costumes! So don’t miss the chance to dress up as your favorite Darth Maul or Star Wars character for Halloween this year!