Today’s younger generation knows Wolverine from the current crop of Marvel’s X-Men movies. But the legendary anti-hero Wolverine has been a popular character in the Marvel comics book universe for many decades. With the catchphrase “I’m the best there is at what I do, but what I do isn’t very nice”, Wolverine warns his adversaries about the potential damage he can inflict with his claws – one of the main reasons Wolverine costumes are so captivating to the animal instincts of men and boys.

Logan’s legendary character debuted in “The Incredible Hulk” #180 in 1974 before teaming up with the X-men mutants in “Giant-Size X Men” #1 in 1975. He was not always called Wolverine, the man was born as James Howlett, but called goes by Logan as an adult. He had a very difficult childhood that led him to violently discover his powers one night, frighting his mother and running away. Logan is a mutant with special powers such as retracting claws, enhanced strength, keen animal senses, and accelerated healing which makes him almost impossible to kill because he quickly bounces back from grave injuries like it was nothing. Wolverine was involved in a super solider program that fused an indestructible metal alloy Adamantium into his skeleton and retractable claws…his trademark mutation and a must-have for Wolverine costumes. Logan is one of the most popular X-Men character in Marvel comics and in the original X-Men movie trilogy. So his popularity has led to a line of Halloween costumes for children, men, and even women. 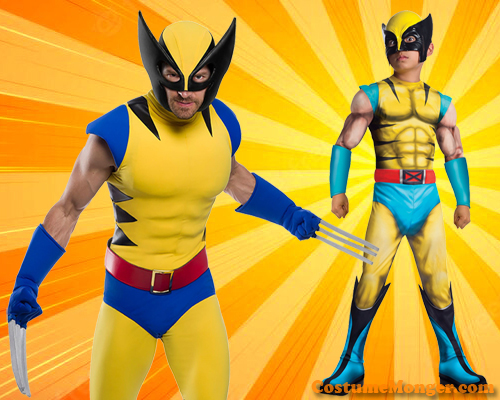 There are several designs of Wolverine Halloween costumes to fit toddlers, kids and men. Wolverine’s original outfit is based on the old school nostalgic comic-book style he first appeared in when he debuted in the Incredible Hulk’s comic in 1974. The original Wolverine costumes feature a highly stylized look with a tight yellow suit accented with bright blue accents. As far as muscles go, you need them so, if you aren’t ripped like Logan then you’ll need to wear one of the foam padded muscle chest Wolverine Halloween costumes. A mask in yellow and blue conceals your identity, and the fierce claws make this enigmatic, private character actually stand out from the pack during Halloween night!

If you are going for the more updated style of Wolverine costumes from later comics, the brown and orange design in Wolverine’s costume is styled very similar to the early versions. For fans of the “X-Men” movie franchise in which Hugh Jackman played Logan, Wolverine wore more conventional clothing consisting of a pair dark jean with a white men’s tank top and add replica claws of the long adamantium metal, razor sharp claws that extend when worked up into a full fury. This expression is full of angst and a belligerent spirit and is often styled to appear like a tough rebel of the day. Costume accessories that you can buy to enhance your Wolverine costume includes metal dog tags that read “Wolverine”, Logan’s only link to his amnesia-blurred past.

These costumes make a heroic impression at any Halloween party or costume convention. You can have your girlfriend or wife dress up as one of the female mutants such as Rouge, Storm, or Jean Grey. Or have your buddies dress up as Cyclops, Magneto, or Beast.