Finding the right children costume can be quite a task, especially when it’s so close to Halloween and you are still not sure what’s the current popular characters are. Kids tend to be attracted to characters they see in the movies or on the television. So we will give you some popular characters that have been popular with children. 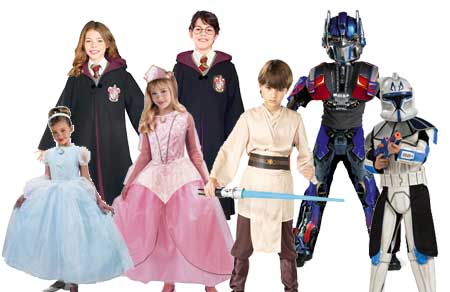 Harry Potter is loved by both kids and adults. This popular character was introduced in books that were adapted into popular movies. Every single character in this movie is noticed and appreciated by viewers. The costumes they wear in the movie have become the most popular movie character costumes. Harry Potter series costumes are one of the favorite choices among kids. The different clothes that are popular as Halloween costumes are the Quidditch robe that includes a hood and Hogwart’s crimson and crest. Costumes are also available for kids who support Gryffindor that comprises of a black robe, burgundy accents, and designed Gryffindor crest patch. This would be the best option if your child is a fan of the Harry Potter edition.

Star wars have been one of the most successful science-fiction franchises, spanning the past three decades. This movie series is based on the battle between humans against aliens. Kids were crazy for the sword used in this series and their unique costumes. There are five famous movie character costumes in this series such as costumes of Darth Vader, Jedi, Princess Leia, Yoda, Stormtrooper. Kids star war costumes would be another best option for your child.

Transformers: This movie has been a huge hit among youngsters and kids. There was a tremendous increase in sale of transformer toys and its movie character costumes of Optimus Prime, Bumblebee and Megatron. If your child is an ardent fan of Autobot family then you can purchase popular children costumes of Optimus Prime and Bumblebee or Megatron the leader of Decepticons for your child. These costumes include jumpsuits and mask of the particular character. The costume of Optimus prime has the 3D image of armor that makes it look like real robot parts.

Batman: One of the most famous characters of the comic world, Batman costume will be another best option for boy costumes. From the child’s viewpoint, this costume is the best because it changes them into their favorite superhero who is also known as the dark knight and the caped crusader. Most of the kids are attracted to this character due to its ability to fly with the help of a cape and the demand for batman costume is increased because this costume includes a similar cape that is used by Batman in comics or movies.

If you have a daughter who loves to play with Barbie dolls inspired by fairy tales like Snow White, Cinderella and her prince charming, Sleeping Beauty, etc. and wish to dress up like those princesses then you can fulfill her wish by purchasing Disney Princess costumes for her. Princess costumes are designed and stitched similar to those worn by the said princesses; this costume includes a beautiful dress, and wings (if the character requires).

In summary, out of this batch, Harry Potter has been the most popular character over the years. Little boys and girls love the fantasy warlock character with magic powers. Another top movie choice is the characters from the movie Transformers which feature robots that transform into cars, planes, and other vehicles. Optimus Prime and Bumblebee are the most recognized robots that kids tend to want to dress up as. Star Wars has been popular with children for decades. There are plenty of characters to choose from, spanning 6 feature films and several television episodes. Clone troopers and Jedis with their lightsabers are very popular with Star Wars fans. For girls, Princess Leia and Padme are the ones you want to shop for. Most costumes are directed for boys but you can find plenty of choices with Disney character costumes like Snow White, Aurora, Little Mermaid, and Cinderella. They are beautiful princesses that wear fancy dresses that little girls love.

So, after going through the above details of Halloween costumes if you have decided to purchase one for your child then you can opt for online shopping. There are many online stores that provide discount Halloween costumes, which will help you make an affordable purchase.